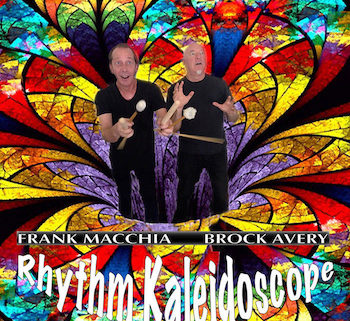 We give music names and put it in categories, but the language itself knows no boundaries. Rhythm Kaleidoscope by Frank Macchia and Brock Avery sends the listener on trip into fresh, unexplored territory. Macchia is a composer who is not afraid to take risks and follow the music wherever it leads him.

Bringing together elements of free jazz, modern classical music, film soundtracks and studio wizardry, Rhythm Kaleidoscope may not be every listener’s cup of tea, but this project presents a wealth of surprises to the instrumental music fan seeking something exciting and unexpected.

Macchia is a prolific composer and arranger whose “day job” in orchestration and music preparation has generated over 450 film and television credits. In his spare time, he has composed, and produced more than fifteen ambitious projects with international orchestras, LA’s A-list studio musicians, and a variety of performing units.

His divergent musical inspiration includes a longstanding interest in the Great Americana Songbook, the music of The Crescent City, (see his 2013 nod to the Dirty Dozen Brass Band) the pulp comics and sci-fi movies of the 1950s, the funk and fusion pioneers of the 1970s, 20th century classical composition, and the arrangements of Duke Ellington and Gil Evans. Macchia’s vision is iconoclastic and he is not afraid to mix humor with serious musical chops.

To create these musical stories, Avery improvised drum solos which Macchia transcribed and orchestrated. Often, he provided Avery with evocative phrases and visual images for inspiration. The solos were mostly first takes and each piece is built on a complete drum performance.

Avery heard a “click track” (a metronomic beat establishing an objective tempo) when recording, but for the most part, he made no particular attempt to play “in time” to the click. Macchia used the click to transcribe the drums and lay out his scores.

Many composers bridging the jazz and classical worlds such as Mike Gibbs, Bob Graettinger and Duke Ellington, have scored for specific soloists and used improvisers to provide color on top of their ensemble writing. In the case of RK, Macchia began with “free jazz” and then composed and orchestrated, reversing this process.

The results are unusual and striking. Each piece is distinct and unique. The orchestration explodes, triggered by Avery’s improvisations. Macchia leaves space around the drums, yet on some pieces there are as many as 50 tracks of woodwinds.

These recordings remind me of short stories, each a single chapter in a themed collection. This is complex and dense music, and I find it unnecessary (and a bit difficult) to listen to more than one or two tracks in a row. Every track stands alone with its own vocabulary of texture and compositional development to savor.

Macchia has written extensive track-by-track liner notes describing the concept and compositional process of each piece. He has also produced a video in which he and Avery discuss the creation of this music.

If you are a fan of sophisticated experimental and conceptual sounds, check out Rhythm Kaleidoscope. This music is unlike anything you have ever heard. You will be surprised and hopefully, delighted.

Full Disclosure: I have known Frank Macchia for many years and have had the opportunity to contribute to his bands and recording projects, including Rhythm Kaleidoscope. I write this review from the perspective of a sideman and a fan. 🙂