September 21, 2010 Off By Eric Jensen
Thelonious Monk, James Bond, and a life of music… 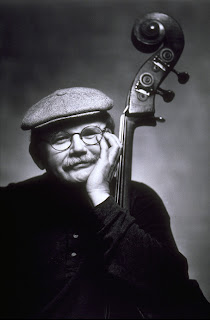 Jazz bassist Putter Smith and his wife, singer VR Smith, have devoted their lives to music and the arts. The music room in their South Pasadena home is filled with instruments, original artwork, and oriental rugs; a welcoming refuge from the hustle and bustle of Los Angeles.

, The Righteous Brothers and many more. Putter had a brief acting career, playing the villainous, “Mr. Kidd” in the James Bond film, Diamonds Are Forever

. He is highly sought as a performer and teacher and is currently on the faculty at the California Institute of the Arts in Valencia.

Originally from the now infamous Bell, CA, Putter began playing bass at a young age. “My brother Carson Smith was a famous bass player.” he told me in a recent conversation. “He had gone to New York when I was eight and had left a little half size bass I used to fool around with. By the time I was eleven I was playing along with his records.” Putter’s first paying gig was at the Compton Community Center playing a bass with only three strings. “I think I made three dollars and I was stoked. Making money as a musician!”

VR Smith began singing in the Los Angeles area over ten years ago and has recorded two CDs of jazz standards, 2004’s VR & The Cafe Beaujolais Band, Lost and Found and her 2009 recording, Beautiful Love, both available at CD Baby. VR acted in improvisational theatre for many years before beginning her singing career. “We did workshops in colleges.” VR says. “Robin Williams came out of one of those. He had so much information he could just incorporate into his “in-the-moment” spiel. (We) always felt like we had really done something there.” VR began singing regularly in a band with Putter and guitarist Dave Koonse at The Cafe Beaujolais In Eagle Rock. “We worked there for six and a half years and brought a lot of people in.” VR says. “The food was great and we were in the newspaper every week.” In those days the LA Times reported on jazz in the weekly Calendar section but has since dropped local coverage.

VR’s vocal style is intentional and introspective. “The words have to mean something to me.” she says. “Having acted I learned that you have different choices on how you say a thing. I try to let the tune be the focus and let the words fall into that.”

Putter and VR met when invited by friends to witness the first performance of The Beatles on The Ed Sullivan Show. “Neither of us had ever heard of The Beatles.” says Putter. “We were into Charlie Parker!” VR adds.

Putter played bass on many famous rock and roll records recorded in the 1960s, including The Beach Boys’, Good Vibrations

. “They did something like 25 different dates.” said Putter. Seeking greater musical challenges he turned his focus back to jazz.  “I decided I didn’t want to do that any more. That isn’t why I played music.” he recalls. “When you’re a musician it’s because you want to play music. There are so many better ways to make money. (At times) I regretted it because we really scuffled. Then when I was in my early forties it turned around.”

Putter’s time spent with iconic jazz pianist and composer Thelonious Monk has been a cornerstone in his career. “I heard him live years before I played with him and I thought it sounded like (Hungarian composer, Béla) Bártok.” Putter says, “Very modern and at the same time having that old New Orleans background to it. Monk had five-tuplets together. That kind of infuses his time feel. People say he plays these triplets that are dragging, but they’re perfect fives. He was a real intellectual guy. That’s what people miss.”  “I was a young, white jazz musician in the 60s when Black Power was prevalent.” Putter continues. “We had this great history in jazz of what they used to call, ‘integration’, long before anybody else. I’ve always tried to go into any gig with someone who has a rep, with a clean brain. All of the media on Monk made him out to be a mysterious, strange person. But I knew from my own experience that whatever they say in the media is almost always wrong. (Thelonious) was a beautiful person. He was like a fountain of sweetness.”

“I got the call because I had done quite a bit of transcription of his (music). I had about two weeks (to prepare) and borrowed every record I could and went through everything. I flew up there. No book, no rehearsal. I go into the dressing room, twenty minutes before the gig. There’s Thelonious, smoking a cigarette and doing his dervish thing, spinning around, and saying cryptic things. Finally he stops and looks at me and says, ‘Are you the new bass player?’ He had this rough, Hell’s Kitchen voice. I said, ‘Yeah’, and he says, ‘White is right.’ (laughs). I knew at that moment that everything was cool.”  “We got on the stand and the first tune he plays is one he never recorded, a beautiful tune called Ugly Beauty. By the end of the second chorus I had it down because I knew the ‘Monkisms’. I knew his vocabulary. He gave me a few more little tests. By the third night I was in. I wish I could have spent twenty years with him.”

While Putter was working with Thelonious Monk at the famous LA jazz club, Shelly’s Mann-Hole, he caught the eye of the director of the James Bond film, Diamonds Are Forever 

. “I got a call about three months later and went down, thinking they wanted a bass sideline.” recalls Putter. “They handed me a script and next thing you know I’m in a James Bond movie. I could not believe it!”

Putter’s bass playing is rich and expressive. He is intently focused when he plays, finding the center of each note and listening deeply to the musicians around him. “Being a musician is something that takes focus, disciple, and regular, unrelenting practice and study.” he told me. “If you want to be an improviser you need to improvise almost every day. To me a performance is 90 minutes of full out playing with someone. It doesn’t matter where or for who. It’s always your full effort.”  “I equate jazz to poetry.” Putter says. “I feel like this music is going to live forever like Bach. It’s a great thing to have in your life, you know, a reason to live.”