I caught guitarist and composer, Mike Clinco with his quartet, at The Oyster House in North Hollywood Monday night. Mike is a fluid, melodic player with a warm, open, sound and a great relaxed feel. He has worked with many extraordinary artists including: Bo Diddley, Bobby McFerrin, Ella Fitzgerald and Henry Mancini. Mike has composed music for film and television, including underscore and source music for ‘Big Shots’, ‘Outer Limits’, and ‘Sex in The City’.

Mike’s group featuring Jeff Driscoll on tenor, Adam Cohen on bass, and Bob Leatherbarrow on drums, played a mix of originals, jazz standards, and tunes by John Abercrombie, Jerry Bergonzi, Vic Juris, and Marc Johnson (“Union Pacific” from The Sound of Summer Running…a great record featuring Pat Metheny, Bill Frisell and Joey Baron). Singer Janelle Sadler and trumpeter Ron King sat in for a couple of tunes adding their magic to the mix.
The sound of the group was conversational, chamber jazz with a swinging groove and a deep pocket thanks to Adam and Bob. The melodic interplay between the guitar and sax was super musical and sensitive. The rhythm section listened hard, provided solid, energizing support and contributed some nice solos.
Mike and I both studied with the late Charlie Banacos, legendary jazz educator. In one way or another, Charlie’s influence touched many of the musicians who were there last night.

Great players and a wonderful night of music. Thanks Mike! I’m looking forward to the next gig… 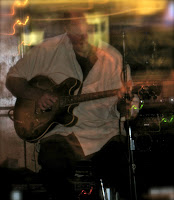